Kevin Durant’s Right Achilles Injury – The Effects of the Rupture 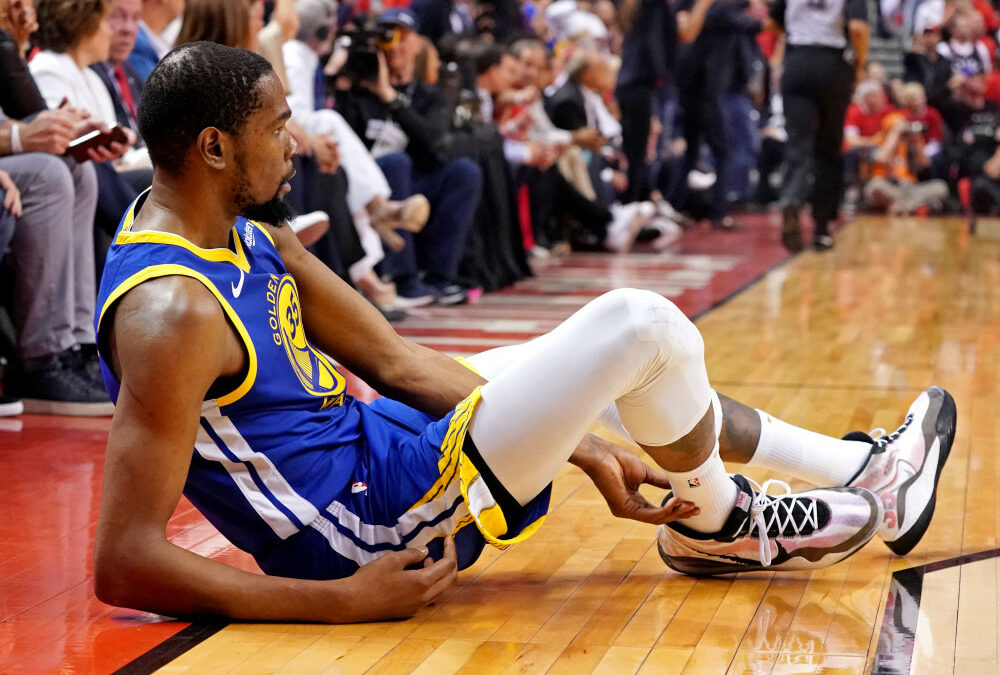 If you didn’t already know, Game 5 of 2019 NBA Finals had the unfortunate ordeal of Kevin Durant slamming onto his right leg and re-injuring it. He was just coming off a quad injury and managed to rupture his Achilles. Before he played in Game 5, he suffered some backlash from people saying Kevin Durant wasn’t a true team player and he didn’t put it all on the line for the Golden State Warriors. Of course, the naysayers have now put a foot in their mouth, because of the damage done. Clearly, Kevin Durant wasn’t ready to go back in as he was only a month into his healing. However, he was still able to manage 11 points in the 12 minutes he did play in the first half.  Despite the misfortune, the Warriors till edged out against the Raptors.

Of course, there were some Raptors’ fans that were cheering for Kevin Durant’s unfortunate injury in the 2nd quarter. However, Raptors’ players were not in support of that misguided conduct. Stephen Curry of the Warriors stated he was, “Very confused around that reaction… It’s not my experience with people of this city. I commend Danny Green and Kyle Lowry especially. I think they were the ones that were kind of signaling to the crowd, like, ‘let’s check ourselves a little bit.’ ” He announced that he underwent surgery to repair his Achilles tendon.

“What’s good everybody I wanted to update you all: I did rupture my Achilles. Surgery was today and it was a success, EASY MONEY

My road back starts now! I got my family and my loved ones by my side and we truly appreciate all the messages and support people have sent our way..”

He goes on to talk about just wanting to be there to support his team and the dub nation. What does all this mean?

First of all, the injury is going to most likely take Durant out all of next season, because he’ll recover within 8-12 months. According to Dr. Alan Beyer, an orthopedic surgeon and executive director of the Hoag Orthopedic Institute, this kind of rupture is “Usually closer to the year from what we’ve seen with other NBA players having this injury.” The interesting thing is that Demarcus Cousins suffered the same injury in February 2018 when he was with the Pelicans. He started playing with the Warriors in January 2019.

Will this change Durant’s playing style? Dr. Beyer told CBS Sports that it’s “Very tough to say. As we saw with Kevin and initial injury, everyone responds differently.” Furthermore, he states, “When you’re reconstructing an Achilles, to tension your repair exactly back to the link that it was before, it is very difficullt to get that exactly right. Then, in the healing process itself, you get some scarring and you get some contraction of some tissue, so the tendon can wind up a little bit tighter than it started.”

Of course, this isn’t a huge factor with the average person. However, a basketball player demands a lot from running up and down the court, pivoting in certain moves, and jumping. It may affect their shooting arc as well. They may have to adjust things in order to get back into a certain rhythm. Time will tell, because it all depends on how he will heal. However, he won’t be 100 percent the same player as he once was prior to the injury. CBS Sports NBA Analyst and former NBA player Raja Bell says, “..in terms of him being the player we’ve seen to this point, no, I don’t think he can be that after this. Find me one athlete who has been 100 percent the same after an Achilles tear.”

This could be a weighing decision as far as his free agency status. It’s very likely that he won’t be back to playing until the playoffs of 2020. He could exercise his player options for the $31.5 million with the Warriors. When it comes to signing a max deal with another team he may get up to $164 million, because he’s still a sought-after player. Or he could get into a long-term max contract with the Warriors at $221 million.

It’s hard to tell where he’ll go for short or long-term play within the next couple of years, but he does have some options on the table. It’ll be interesting to see what choices he makes after he recovers from his injury.